Tapping the international talent marketplace offers businesses a slew of advantages such as better diversity, improved productivity, and increased profitability. However, before you reap these...

Tapping the international talent marketplace offers businesses a slew of advantages such as better diversity, improved productivity, and increased profitability. However, before you reap these benefits, you must first comply with the host country’s laws and regulations, particularly in terms of compensation. One example of a monetary benefit you need to be aware of is the year-end bonuses commonly known as 13th month pay.

If it’s the first time you have encountered 13th month salaries, you’re probably wondering about what changes you need to make to your compensation packages for overseas teams. For starters, how do you calculate it and when should you pay it? In addition, who is qualified to receive this benefit?

To help you answer these questions, we’ve put together this guide on 13th month pay. This way, you can have a concrete understanding of how you can integrate it into your pay structure. We have also included information on which countries mandate this form of compensation as well as how partnering with a business process outsourcing (BPO) company can help take some load off of your shoulders.

In a nutshell, the 13th month pay is an additional compensation often equivalent to a month’s worth of salary or one-twelfth of the annual wage. It is a monetary benefit implemented in many markets across the globe and can either be mandatory or customary depending on the host country’s labor rights and compensation laws.

The 13th month pay originated from the Philippines when President Ferdinand Marcos issued Presidential Decree No. 851 in 1975. This law was created to compensate for the low minimum wage rates at that time. It was meant to allow low-income earners to celebrate the holidays without having to worry about being unable to pay their monthly bills.

For this reason, the 13th month bonus or 13th month salary is typically paid at the end of the year or before Christmas. However, not all countries follow the same structure for this bonus.

Some nations that mandate the 13th month salary choose to pay it on or before other important cultural dates. For instance, Indonesia usually distributes the bonus a week before the major religious holiday that an employee observes. So, if the employee is Christian, he or she will receive the compensation before Christmas. Meanwhile, if the employee is Muslim, he or she will be given the bonus before Eid'l Fitr.

In other countries, this monetary benefit may also be paid in installments. For example, in Argentina and Colombia, half of the bonus, which they also refer to as aguinaldo, is paid in June while the remainder is paid in December.

This can only mean that whether you hire an Argentinian BPO firm or partner with a Philippines BPO, the implementation and purpose of this added compensation will be different. As such, companies looking to build overseas teams must take extra steps to learn local regulations and salary compliance practices.

How is 13th Month Pay Calculated and Paid?

Computing monetary benefits based on the regulations of another country can be daunting at first. However, once you learn the formulas behind them and integrate them into your payroll process, you might be surprised at how simple these computations actually are.

As mentioned previously, the 13th month pay is often equivalent to an employee’s monthly base pay. So, granted that a worker has no absences or deductions and has worked at your company for an entire calendar year, the bonus should be the same as the basic pay and you don’t need to compute further. However, this won’t always be the case. As such, you can try several methods to get a more accurate calculation.

Note that the basic salary should not include the employee’s allowances, night shift differentials, and other monetary benefits. This is because the base pay is the fixed amount agreed upon in an employee’s contract. By including additional payments in your computation, you will end up paying a 13th month salary that is well over what is required from you.

Another approach that other companies use is to take the employee’s annual compensation and divide it by 13. This method allows them to compute the monthly gross salary. Similar to the previous approach, this also ensures that the calculation of the bonus would not be affected by factors such as commission, deductions, overtime pay, and the like.

As for taxes, the 13th month pay is usually exempted. However, some countries may have restrictions on this matter. The most common of which is that the payments exceeding one-twelfth of an employee’s basic salary are taxable. For example, in the Philippines, P90,000 is the maximum non-taxable amount.

These calculations aside, employers should also take into account that the 13th month pay calculation will largely depend on the structure of your compensation packages. In addition, you will need to factor in local regulations and compliance standards.

Who Qualifies for 13th Month Pay?

All qualifying employees should be given this bonus even if they have only been working at a company for less than a year. The same applies to workers who resign or have been dismissed from employment before receiving their 13th month salary. In cases like these, the amount will only be prorated to a lower bonus that will be based on the number of months they have already rendered.

On the flip side, there are employees who do not qualify for a 13th month pay. However, the conditions that lead to this disqualification may vary per country. Some of the most common examples of workers that do not receive this monetary benefit are:

While it is not mandatory to provide a 13th month salary for the professionals listed above, keep in mind that there are still companies that opt to grant this bonus. After all, it is great for boosting employee morale and job satisfaction. These, in turn, benefit businesses in the long run.

13th month salaries are common in many developing countries as well as in some first-world nations. However, as an employer, you should know that while the computation of this bonus may be similar across countries, the implementation may vary in terms of conditions and pay dates. There are even governments that mandate 14th salaries and additional bonuses.

To give you an idea of these differences, here are some countries wherein 13th-month pay is mandatory:

Aside from the countries listed above, there are many others that implement the 13th month salary. However, it is worth noting that not all that do so require it by statute. There are countries like Croatia, Hong Kong, and Singapore wherein this bonus is only customary. In these cases, you may need to dig a little deeper into how other companies in the host country implement this bonus so you can get a pulse of whether your employees will expect it from you.

Ensure Salary Compliance by Working with a BPO Outsourcing Company

Payroll is complex enough to process for local teams but it becomes twice as difficult to manage for overseas employees. Aside from making sure each employee is compensated accordingly, administrative staff also need to deal with different financial regulations, tax laws, and other legalities.

Partnering with a business process outsourcing firm like Helpware can make this process less cumbersome and ensure complete salary compliance. With them by your side, you can:

As an employer, you are duty-bound to ensure proper compensation for your workers wherever they may be working from. However, doing so entails learning local employment laws, consulting experts, and constantly keeping up with changes to regulations. It is for this reason that companies who hire overseas teams choose to partner with business process outsourcing companies.

Whether you are looking to set up a call center support team overseas or hire international digital marketers, having a reliable BPO company like Helpware by your side can help you maximize your outsourcing experience. They will not only allow you to build the international workforce you require but also take care of back-end processes that come with managing employees overseas.

Out of necessity, the coronavirus pandemic ushered in the age of the remote team. And even as the pandemic gradually winds down, many companies have no plans to look back. ...

How to Prevent Burnout in the Workplace

High levels of workplace stress have left many seeking advice on how to prevent burnout. Feeling anxious about deadlines, presentations, or a busy schedule every so often is ... 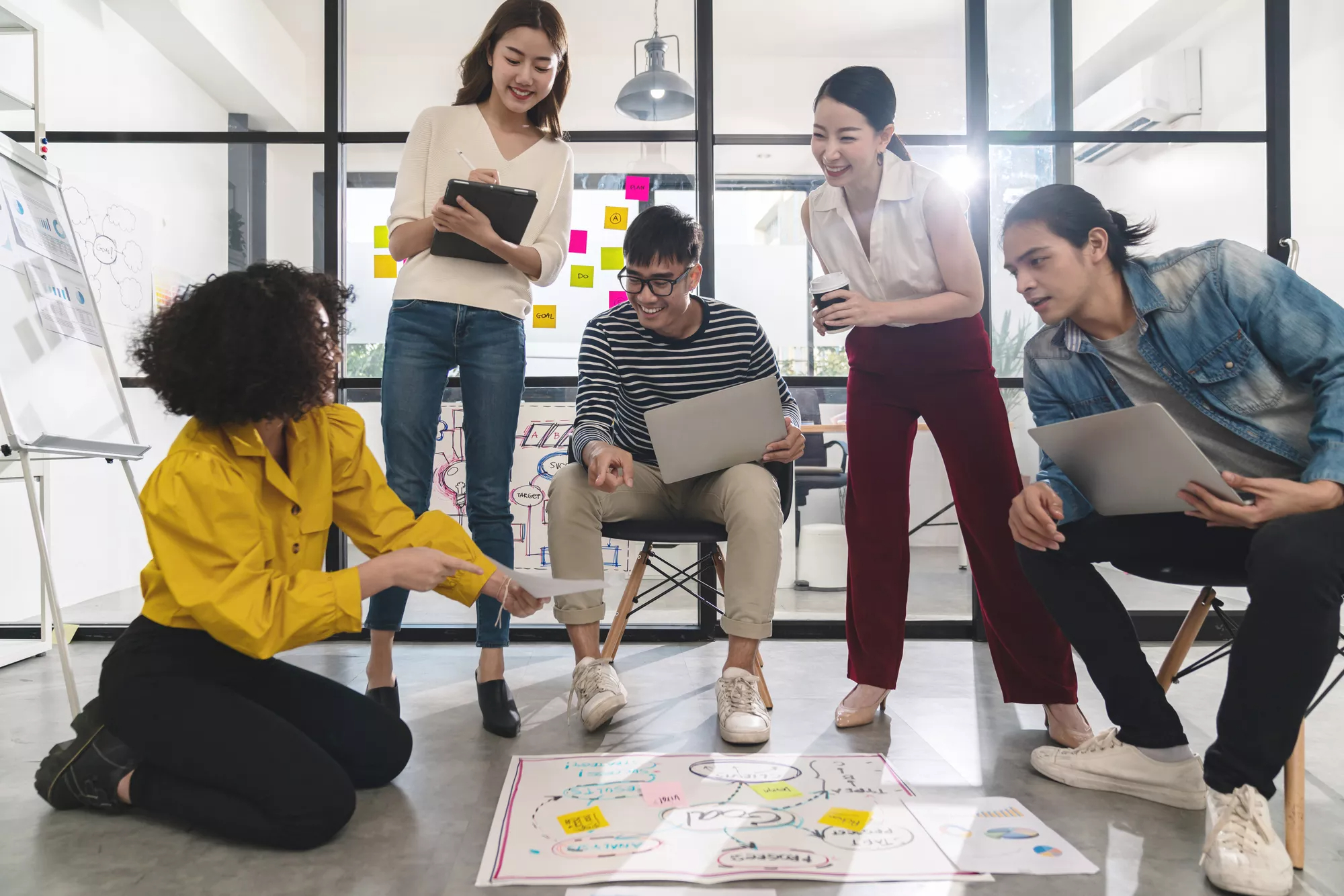 7 Ways to Maintain Strong Company Culture within a Remote Team

How important is company culture? Is it just a matter of boosting employee morale so they can perform their work better? Is it setting up the workplace in such a way as to make it ...
Tags: Employee Management